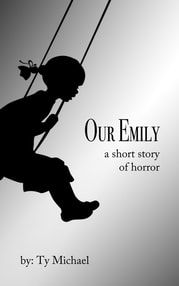 "This tale is sharp and breaks all the rules of the typical disappearance story lines while serving as a haunting gateway into Ty Michael's twisted world of novels!"
---
"I have to admit that for a piece of flash fiction, the story is very powerful. And as jaded as I am from reading hundreds of horror stories and novels, I really didn’t see that ending coming."
Our Emily
a short story of horror
___
​
Copyright © 2021 Ty Michael
www.TyMichael.net
All rights reserved.
This is a work of fiction. Names, characters, businesses, places, events, locales, and incidents are either the products of the author’s imagination or used in a fictitious manner. Any resemblance to actual persons, living or dead, or actual events is purely coincidental. No part of this publication may be reproduced, or transmitted by any means, electronic, digital, mechanical, photocopying, or otherwise without written permission from the author.
1.
Robert’s cell phone rang as he twisted the key inside the lock on the front door. “Crap,” he mumbled, pushing the door open and fishing out his phone.
“Yeah. Hello,” he answered, now squirming out of his wet overcoat.
“Mr. Glover.”
“Yes.”
“Mr. Glover, my name is Henry Miller. I’m from the Federal Bureau of Investigation, the FBI,” the voice on the phone said. “Do you have a moment?”
“Yes. Sure. What’s this about?” Robert asked, even though he had a feeling.
“It’s about your daughter.”
Robert went silent. He set his keys down on the granite countertop and pulled out one of the barstools.
“Are you still there?” Agent Miller asked.
“Yes, I’m still here.” Robert’s mind raced in a thousand directions. His daughter, his and Becky’s daughter, was only two years old then. “Do you have any news?” Robert asked the agent.
“I do. Is there a time that I could come by?”
“Can’t you tell me over the phone?” Robert’s tone was that of impatience.
“I’d prefer to meet you and your wife face to face.”
Emotions boiled over in short notice. “Just tell me, dammit. It’s been over eighteen years. I’ve been waiting to hear something for eighteen damned years.”
“I’d prefer …,” the agent encouraged.
“Just tell me. Did you find her? Her body? Just tell me!” Robert leaned on the counter, rubbing his forehead roughly. Tears were forming in the corners of his eyes.
“Mr. Glover.”
“Yes.”
“She is alive.”

2.
Robert couldn’t wait. He had to tell Becky. She was at work, but he made the call anyway.
“That can’t be,” she’d said, first in disbelief, followed by, “Is he sure?”
“He’s fairly certain.”
“Robert, how can we be positive? They can’t do a DNA test on us as her adoptive parents, and she had no known birth family that can be tested.”
“I know that,” he said.
“And all we have now are photos.”
​     Her skepticism sucked the air right out of him. “Becky, I don’t know all the details. I’m sure that they connected many of the dots before he called me.”
“I only …,” she stuttered, “… I, I only don’t want us to build ourselves up for a huge letdown. That’s all.”
Robert paced the kitchen. “Yes, I understand. I do. The agent is coming over this evening. We can press him for all the specifics then.”

3.
Agent Miller gave the waist of his pants a tug and unbuttoned the lower button of his suit jacket before sitting in the armchair.
Robert and Becky took the sofa, catty-corner to the agent. They sat close, holding hands with their knees barely touching.
Becky was first to get to the point after the introduction formalities had taken place. “How can you be sure that this girl really is our Emily?” In her hand, she held the photograph that Agent Miller had given her only minutes before, a portrait of a twenty-year-old woman, a vibrant young woman with chestnut-brown hair and green eyes … just like Emily’s.
The agent clasped his hands together, fingers intertwined, and his body tilted forward in the chair. “As you are aware, running a lab test is not a viable option in this case, we have to go on circumstance and forensic imaging. Veronica, that is the name that she has grown up with, has only recently learned of a piece of her history that has turned her own life upside down.”
Robert and Becky listened intently.
Agent Miller continued, “Veronica’s father passed away roughly five years ago and her mother lost her battle with cancer only last month.”
The Glovers now shifted nervously.
Agent Miller rubbed the stubble on the side of his chin. “There was a death-bed conversation that ended up being a very unexpected confession. Veronica’s mother confessed that she and her husband had, in fact, kidnapped Veronica as a toddler in Dallas. After taking Veronica, they moved to Seattle. Documents were forged and they simply began a new life with their new little girl.”
“You mean our little girl,” Robert blurted out.
“Yes, Mr. Glover, your little girl.”
Robert’s thoughts went back to that day, eighteen years ago. It was a pleasant day, December the thirteenth. Only two weeks before Christmas and Emily had nearly two dozen presents wrapped and waiting under the tree. None were expensive or extravagant, just cheaper, trinket-type toys from the discount store. He and Becky knew that most of the enjoyment for Emily would come from the unwrapping itself.
On that December morning, Robert was playing in the backyard with Emily, pushing her back and forth on the swing that hung from the big limb of the oak tree in the corner of the yard. The grass had turned brown weeks ago and fallen leaves loosely blanketed the upturned soil near the wooden fence. The lumpy mess of dirt was he and Emily’s failed attempt at a carrot garden.
Becky came outside to tell him that he’d been called in to the office. He gave Emily a kiss before leaving and that was the last time …
Becky assumed playtime duty, but she’d been ill all that week from a cold. She went inside to grab a tissue, leaving Emily sitting in the grass with one of her dolls. It was only a minute. It was only a minute, but when she came back out, Emily was gone.
Robert still remembered exactly what Emily was wearing. She had on her favorite dress. It was bright blue with white polka dots on it.

4.
The Glovers had decided to meet Veronica at a local diner. Agent Miller advised that their first meeting should be somewhere neutral.
Becky held a photo of young Emily, their young Emily, for the entire two hours.
Robert watched Becky through the corner of his eye. She’d glance down at the photo in her lap every so often, then lift her eyes to study some facial detail. She seemed to be looking for that final clue, the final clue that would warrant her full acceptance.
He, on the other hand, fought back his emotions the whole time. It was a far-fetched tale, no doubt, stranger-than-fiction and something right out of a cable TV drama. But he believed it. Deep down, he believed it.

5.
Striking up a conversation on the dark ride home was fruitless. Robert didn’t know what to ask, didn’t know what Becky was feeling and, in a way, had not even come to grips with his own feelings.
Robert sat on the foot of their bed, untying his shoes while Becky was in the closet changing into flannel shorts and a loose t-shirt. There were so many ways and so many phrases that he could have said to ease into the obvious tension, but he opted for straight-forward. “So, you don’t think that she is Emily, do you? Our Emily?” He waited patiently for an answer.
She stepped into the opening of the doorway, arms crossed, eyes looking right into Robert’s and she confidently said, “No, I don’t.”
“Oh,” Robert muttered, his own eyes falling to the floor.
“I’m sorry, Robert,” she said, “I know how much you want this to be true. I know how you’ve dreamed of finding her ever since … I know how much you hurt. I … I just don’t think that girl is our Emily.”
“But I do!” The words came out of his mouth without thought and much louder than he had intended. “It all makes sense, Becky. The timelines match up. The location matches up, and shit, Becky, you’ve got to admit that Veronica does look like her. Did you see her left ear? The top of her left ear? Did you see the faded birthmark? I know you saw it.”
Becky didn’t respond.
Like the champagne from an uncorked bottle, Robert’s emotions were foaming over and there was no stopping until the pressure subsided. He rose, standing only a foot from her. “Becky, I’ll do whatever it takes! I’ll do whatever I need to do to be sure … to prove … to prove that Veronica is our Emily.
To prove it … to you!”
​
6.
Robert woke to a scratching sound coming from outside, from the backyard. His hand patted at the space next to him to awaken Becky, but it fell against her empty spot with a soft thump.
He opened his eyes.
The bedside clock read 2:43 a.m.
The sound outside continued.
Swinging his feet down to the carpeting, he got up and parted the curtain with one hand. Their master bedroom was on the second story and its window overlooked the backyard.
Out there, near the fence, was the shadow of someone feverishly working in the dimness of a flashlight that lay in the yard, its beam of light filtered by the dead blades of grass and fallen oak leaves.
Robert studied the action for a moment until his brain registered what the shadow was doing.
Digging.
Slipping into a pair of sneakers and snatching up the aluminum baseball bat near the door, he rushed down the stairs. The kitchen light was on and setting on the counter was an open bottle of vodka, its screw cap lying next to it and a half-full glass inches away.
The door to the backyard was cracked open and he could see her silhouette clearly.
He pulled the extra flashlight from the junk drawer and quietly parted the door enough to slip through.
Becky’s back was to him and her heavy breathing, along with the sound of the shovel, overpowered any noise of his approach.
Robert circled around. Stopping in the grass, still out of Becky’s sight, he flipped on the flashlight.
She turned to him in surprise. Her mouth slacked, but no words escaped.
The beam from Robert’s flashlight bounced around inside the shallow trench that Becky had dug and … he saw it. Mixed in with the chunks of loose soil, he noticed the faded and decomposed fabric.
The colors were barely visible through the dirt and the twenty years of rot, but there was no mistake. It was blue … with white polka dots.
Becky’s voice seemed to echo through Robert’s head, as if the voice were somewhere in the distance. She shouted to him, “I’ll prove it. I’ll prove it to you that she is not Our Emily!”
The End
--
Please be sure to check out my novel-length works on Amazon or B&N with a search of my name,
Ty Michael. Or visit www.TyMichael.net
--
You can also leave a review of this short story on Amazon here: Our Emily Review page